Back in about 2016, "giant" games were all the rage in classrooms. Giant Jenga, Giant Kerplunk, Giant Checkers, and so on. Traditional games were coming to life in larger sizes, and I got on the bandwagon with a twist on a fun pasttime for one of my student teachers. I was a clinical professor at this time and she was finishing up her student teaching. I asked her if she wanted to go in on a game of Human Battleship with me, and she gladly accepted.
It was a blast to do in her class all those years ago, and for some reason I just hadn't done it since. Until now. As my classrooms at school are reviewing the year's content, I wanted to offer them an alternative way to make review fun. If you're interested in learning how to set up and play, here's how I did it:
1) Went to Lowes Hardware and purchased a blue/green tarp that can be found in the lawn and garden section. I got 10' x 12' for about $15.
2) Also bought bright yellow duct tape and painters tape.
3) Laid out the tarp flat on the ground and taped down a 5 by 5 grid with the yellow duct tape on both sides of the tarp.
4) Made "hit" (explosion graphic) and "miss" (a red X graphic) cards that could be used during the game. Laminated them and placed Velcro dots on the back. The other half of the Velcro dot goes inside the 5 by 5 grid you made on the tarp.
5) Hang up the tarp in the classroom where this will be played. If your tarp has grommets (eyelets) and you have a drop ceiling, you can open up paper clips and attach it to the cross sections of the ceiling. You may need to get more creative if you have less traditional classroom ceilings or you are not given permission to hang from the ceiling.
6) On the floor of the classroom, make a 90" x 90" grid on each side of the tarp using the painter's tape.
7) Make four sets of A-E and 1-5 cards. Two sets go on the tarp grid, and two sets go on the floor grid.
How to play:
Materials: Dry erase board, marker, and eraser per student; questions to ask students
1) Students break into two teams. Depending on how many students, determine how many "ships" you want to have and of how many. For example, if you have 20 students, you would have 10 on each side. From there you need 1 captain, and then the remaining 9 can make one ship of 4, one of three, and one of 2. Alternatively, you can have three ships of 3. It's up to you.
2) The "ships" find a place on the floor grid. Be sure they arrange either horizontally or vertically.
3) The captain can move around, but must stay within the floor grid.
4) Teacher asks a question. Every single student works out the problem.
5) After an appropriate amount of time (try to keep it brief), the "human ships" show the captain their dry erase boards. The captain then must decide if their answer is affirmed, or if it may need to be changed. The captain's answer is the only answer that counts for the team.
6) If a captain gets the answer correct, they get to "fire" over to the other side by calling out coordinates. If both teams get the question right, both teams get to fire. If the "fire" is a miss, the captain places the miss card onto the tarp grid. If the fire is a hit, they place the hit card on the tarp grid.
6a) In addition, if there is a hit, the person who was hit switches with the captain and becomes the new captain. The person who was the captain sits down in the spot that was hit. This is so more people get to be the captain. Remember, everyone still participates with each question, even if they are sitting because of a hit.
7) The game continues until you run out of time or all ships have been sunk. I would recommend throughout the game marking questions that a large portion of students miss so they can be reviewed afterwards.
That's the general overview of how I've played the game. You can, of course, modify to meet your needs, but a few final tips:
1) Keep the pace moving. Not everyone needs to finish every problem in order for you to have them show their boards to the captain.
2) Make sure students stay in their square. When students start moving around it makes it hard to say hit or miss.
3) Only allow the captain to "fire" coordinates and to place the hit and miss cards on the tarp. Otherwise you will have too many hands in the pot, so to speak. 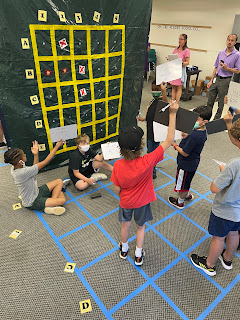 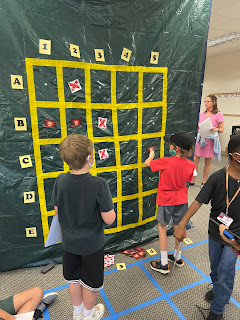 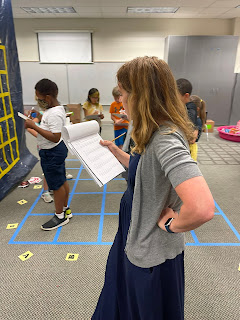 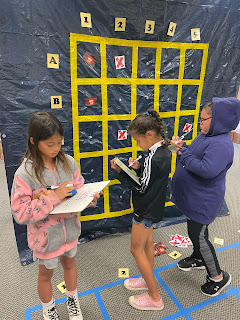