Where the Arts are Alive and Well

I admit, I am a harsh critic when it comes to teaching.  I am quick to find holes in pedagogy and engagement; skeptical when I hear about the best teacher in the school from the administrator. To be fair, I am also my own worst critic of my own teaching.

In other words, it is hard to blow me away these days.  I am usually set after observing a teacher for about 10 minutes.  So I stand (or type) before you humbled and in awe of a teacher who captivated and amazed me this week.

I had the privilege of having my lab students observe Ms. Adams, a dance teacher at Arts Based School here in Winston-Salem.  I will do my best to paint a picture of what we saw:

Day 1: Ms. Adams was teaching a Kindergarten class.  The students were learning about weather in science, so on the board were weather vocabulary words that they had been learning about with their classroom teacher (tornado, thunderstorm, rain, snow, wind, etc.).  The students came up with symbols that could represent each of these words, such as a swirling cyclone diagram for tornado.  Then the class broke into groups of two or three and had a dry erase board and marker.  Each group came up with a dance movement for each weather vocabulary word (like a hammering movement for thunderstorm).  Next, each group was able to come up with a sequence of weather terms that they wrote on their dry erase board, for which they could use the full word or write the symbol.  Finally, the group had to practice their movement sequence based on the movements they derived for each word in the order they wrote them down.  As time wound up, she took her tambourine and hit it twice, at which point all students stopped what they were doing and faced her like little soldiers.  She then had the students line up and share what letter they were on today (E - expert, S - skilled, N - novice).  This was a self-reflection on their ability to listen to directions in class, perform the required tasks, and control their bodies and behavior.

Day 2: On this day, Ms. Adams was teaching a 2nd grade class.  When we walked in, the class was broken up into pairs, with partners making human mirrored images with each other.  They then had to identify how many lines of symmetry their formation had created.  Ms. Adams challenged them to create formations that would have three and four lines of symmetry.  Students were called back to the dry erase board, where they reviewed various shapes they had been learning with their classroom teacher.  Next, students received large stretchy bands (see picture below): 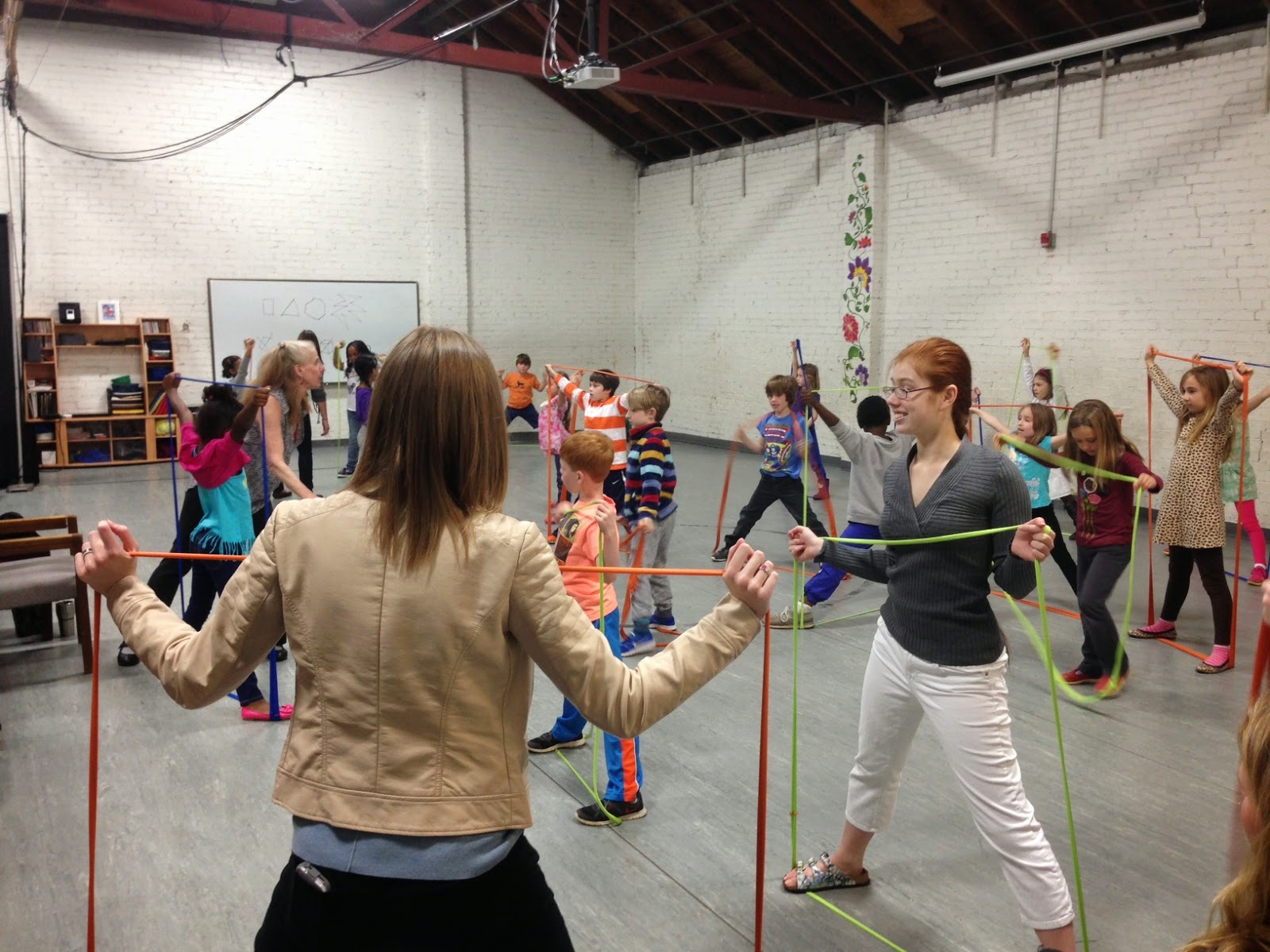 Students were challenged to make polygons, quadrilaterals, and identify lines of symmetry at first, but then more specific challenges like "make a quadrilateral with three lines of symmetry" began.  The students took their math vocabulary and demonstrated these directions alongside of my WFU students.  At the end of class, this 2nd grade class did the same as the kindergarten class in evaluating themselves.

Ms. Adams, a veteran educator (and also the NC Charter School 2013-2014 Teacher of the Year), showed how easily and how much fun it can be to integrate movement into curriculum.  She demonstrated rigor in her approach, and the active engagement was flawless.  The collaboration of content and the arts is skillfully done at Arts Based School, and Ms. Adams has at least one new huge fan of hers!
Posted by Adam Dovico at 12:54 PM 3 comments:

Where Common Core Is Working

I was in a second grade classroom this week observing one of my elementary education majors in her room.  The cooperating teacher was leading the morning work review of two digit addition.

In what seemed as natural to us as adding 36 + 67 as we were taught (line up the numbers vertically, add 6 + 7, write down 3, carry the 1, add 3 + 6 + 1, write down 10), these second grade students fluently demonstrated five different methods to add these numbers, including drawing base ten blocks, breaking apart the numbers, using number bonds, and so on.  The vocabulary they used, the methods they implemented, and the confidence in which they solved these problems in one fell swoop showed how policymakers royally screwed up implementing the Common Core.

You see, these second graders have been taught to use various solving methods since kindergarten.  Quite simply, they do not know any other way.  As parents and educators complain that Common Core is complicated, convoluted, and unnecessary, I wish they could see how fluently these students were breaking apart numbers and reconstructing them.

The flip side to this story is where it went wrong.  Three years ago, asking fourth, fifth, sixth graders to suddenly change the entire way in which they learned math to something entirely new was setting them up for failure.  It would be like the United States suddenly deciding we would drive on the left side of the road.  Could people figure it out?  Eventually, yes.  But there would be an uprising like no other in the interim, not to mention a lot of accidents.  The crashes of the Common Core are well documented in a series of viral videos, articles, and testimonies from students, parents, and teachers who cried to come back to the old ways.

The facts about Common Core's flawed construction is well-documented (or see any other Diane Ravitch speech or article), and there are any number of other holes that can be identified, but with my own eyes, I saw where Common Core is working.  So to those policymakers (especially in NC looking to once again rewrite standards,  it would be a shame to have those second graders (and kindergarten and first graders) who have started their schooling with Common Core to now have to learn another whole way of learning math if we were to get away from Common Core for them.  Oh wait ......... [let that sink in for a minute]
Posted by Adam Dovico at 2:10 PM No comments: