Authentic Learning: It Can Be Done

The final slide for all of my workshops has the same ending: "What CAN you do?"

I put this because "we can't do this in public school" or "my kids could never do this" is too cliche to put onto a slide.

Joking aside, I do hear those negative thoughts often and I want to spark a change in ideology.  I ask educators in my workshop to take the "we can't do this" and throw it out.  If we only spoke of things we couldn't do, there will never be change.

The Common Core State Standards (CCSS) have been passed in 45 of the 50 states and for those of you not in education, these are a set of learning standards that states have created so that no matter what state you are in, students will be on the same page.  So if a 4th grader moves from Massachusetts to Oregon in the middle of the year, there will not be different standards the student will be held to.  In my teacher opinion, I like it.  It levels out a playing field on paper.  At the end of the day though, teachers are still behind the helm, and the standards do not define how teachers should teach.  Which is both an exciting and frightening thing all at the same time.

Those teachers who say they can't are going to have a different looking classroom than the teacher who says they can, even if they are both teaching about prepositions or mixed fractions.  One of the major pushes from CCSS is to create authentic learning; take the standards and build deeper meaning.  One of the new sayings is that instead of taking learning a mile wide and a foot deep, now we are going a foot wide and a mile deep.  This means we no longer are just looking for surface level learning for students, but rather deeper learning through higher order questioning, connections throughout content, and authentic experiences.  This does not mean just make it harder, it means make it more meaningful and provide the support to get there.  Ultimately, we are making our students college and career ready (CCR as the cool kids call it).

Recently, Dr. Jones (@drvcjones on Twitter) and I had the opportunity to offer our Ron Clark Academy 7th graders a great authentic learning experience with our second annual Math Mall Marathon.  We take our students to Lenox Mall in Atlanta and students travel throughout the mall to complete math challenges based on different stores, items, and parts of the mall.  To prepare for this, we go to individual stores and get permission, and we find which stores are more accommodating then others.  Big thanks to Dr. J. for doing so much prep work this year without me in Atlanta!  From there, we create challenging questions that involve critical and cooperative thinking.  For example, students have to travel to the currency exchange kiosk and based on current exchange rates, figure out the following:


Now take that dollar amount and convert it into Yen.


(   UNSCRAMBLE and then go to the following store:

These are just a sample of the 20+ problems students could solve in the two hours they had.  It was exciting, fast paced, and the students were learning!  Each team had two to three students and a parent chaperone (though they were not allowed to help) and in the end, Dr. J. and I were impressed with how well the students did.

I want to bring up that Dr. Jones has been doing this activity for many many years, so she has done this with hundreds of students in numerous schools.  Any school, anywhere around the country can do this with the right preparation and dedication.

Here are some pictures from the event:

Groups had to solve three challenge problems before they could set off around the mall. 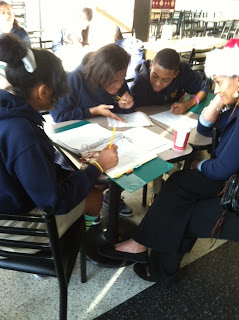 Dr. Jones discussing a problem with Derius and Mariah 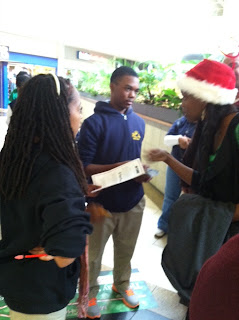 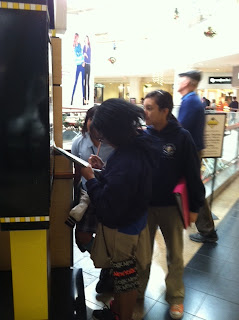 Kalani, Natalie, and Terrell doing some algebra in Champs 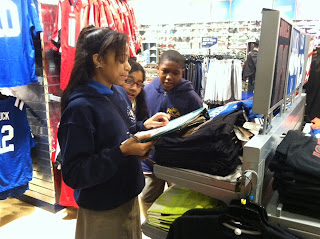 What's the best deal you can get taking a picture with Santa? 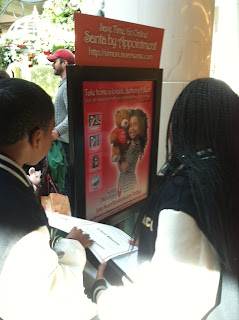 Posted by Adam Dovico at 9:58 PM No comments:

I was in Atlanta on Friday, December 14th when the tragedy in Newtown, CT happened.  That morning I was at Lenox Mall with the 7th grade doing a math project (more about that on the next blog post), but when I got back after lunch I looked at the television in the lobby and saw what is now becoming an all too common site - another school shooting.

As I pulled up my laptop and saw the details of what was unfolding, this shooting just felt different.  I clearly remember Colombine and Virginia Tech and how they made people rethink school safety and the extreme violence that exists in our country.  What was happening in Sandy Springs Elementary School seemed to hit me much harder.

After thinking about it over the weekend and being saturated with 24 hour news coverage of Connecticut, I realized that it is me that has changed.  I am now a dad.  My 14 month year old son, Ryder, is all I thought about as I watched the families mourn on television.  Then it all just hit me at once.  I thought about what if it was Ryder in that classroom?

As a teacher, I am constantly thinking, "What would I do if it was me?"  I hope that I will never know the answer, but I am inclined to think that I would do what most any teacher would do, protect my students.  Just like the heroic story that has come out about Vicki Soto, the first grade teacher who protected her students, teachers are wired to think quickly and of the kids first.  When they are in trouble, we want to help.  We spend so much time with our students each day, each year, they truly are a part of our lives.

It is hard putting all of what happened into words, as a teacher, as a dad now I struggle with what it will take to address these issues.  With the fast paced world we currently live in, and news stories sweeping through our televisions and computers at rapid speeds, it's so easy to become entrenched to the next hot story.  Let's hope that this does not happen here and progress can be made to make sure this does not happen again.

Now that I am wrapping up my first semester traveling to schools, observing classrooms, working with teachers, and conducting workshops, I am beginning to reflect on a question that I get asked quite frequently these days: "What do you see as you are at these schools?"

Usually these questions come when I am speaking to principals, I think sometimes to compare their school to others, but more generally, just out of curiosity.  The answer is a complex one, but I think I can fairly say that there is one generalization that will explain many of the observations I see and situations I find.  That being, majority rules.

From city to suburbs, country to the projects, this seems to define the situation in many schools.  Let me explain.

There are good teachers in every school I have been in, hands down.  Good teaching comes in all shapes and sizes, from first year teachers to twenty year veterans, Kindergarten to 12th grade.  The difference between the successful school and the struggling school is how many good teachers exist in the school.  When the majority of the teachers are strong, and have high expectations for these students (more about this later), then the school is typically more successful.

This may be oversimplifying a complex issue, but it seems to be a theory that holds true as I go from school to school.

Notice, I have not said anything about students.

This success usually comes in the form of the expectations practiced.  Notice, I did not say expectations set, but the expectations practiced.  I have learned that they are two different things.  I have seen posters on the wall, messages on the morning announcements, stories from teachers about how strict they are, but I do not pay one bit of attention to these.  I want to see it.  Show me how you practice these high expectations.  Schools that practice them instead of simply stating them have been by far and away the most impressive and successful.


Schools that on paper should be failing (typically because of perceptions of student population), are flourishing because of their staff and the expectations practiced.  Transversely, schools that should be blowing it out the ceiling are underachieving for the same reason.  I've been in both.

On a side bar, I am beginning to rethink how I address the issue of high expectations when I am in schools.  Instead of talking to educators about setting high expectations, I feel I should have the discussion based on practiced high expectations.  I think I will achieve more in the long run.

So how does this majority rules happen?  To be honest, I'm not exactly sure, but it appears that it starts at the top.  I have seen that when there is a strong principal, who sets and practices the high expectations for his or her staff, it seems to trickle down.  Also, when principals are given the ability to get rid of negative energy or poor teachers, good administrators will bring in stronger teachers.

I have also seen the majority shift because of several strong teacher leaders.  I have been introduced to several teacher leaders as I travel who have been given the credit for turning the school around because they have taken the initiative to do so, despite administration.

At the end of the day, this is not something that is easily fixed.  It sometimes takes years to shift the majority.  Think about habitually horrible sports teams.  Sometimes it takes years to get a good team.  But sometimes you bring in that new coach, or clean out the roster and rebuild, and you see the majority shift to a winning attitude and skill set that practices what they preach.  The same goes for schools.  We need to find winning teams, teachers who not only know how to achieve, but can prove it too.
Posted by Adam Dovico at 8:42 PM No comments: