Merhaba!  Greetings from Turkey!  For the past five days I have had the pleasure to spend time with nine wonderful Ron Clark Academy students and my partner in crime and co-advisor, Gina Coss, as we watch our students participate in the Hisar Junior Model United Nations Conference in Istanbul, Turkey.

We were fortunate to tour this beautiful and historical city, seeing some of the great landmarks like Hagia Sofia, Blue Mosque, Cisterna, Galata Tower, Grand Bazaar.  We even took a morning trip to the Asian side of Istanbul!  The buildings we were in, ranging from 500-2000 years old, are marvels of history and construction.  Simply amazing, and something that we were blessed to be able to see.  Shout out to our friend Joe Day for taking us around and giving us a great experience.

The primary focus of the trip, however, was the Model United Nations Conference.  And a great conference it was.  The Hisar Junior Model United Nations Conference is in its 7th year and is completely organized and run by high school students.  These were some of the most mature, well spoken, and organized high school students I have ever met.  They were truly top class.

Specifically, the organization and detail that went into this conference was spectacular.  With 700 middle school students, things can go bad real quick.  The Secretary-General had a staff of more than 70, well wired with walkie talkies and ear pieces and ready to fix any problem that arose.

The best part of these conferences, in my opinion, is the people you meet.  We were the only American school there, which I thought was pretty special.  The kids were able to meet new friends from not only Turkey, but Egypt, France, Germany, Luxembourg, and their closest friends, Greece (who stayed in the same hotel as us).

For me, it was just as special because I was able to meet teachers from not only those countries listed above, but teachers who have taught in and come from countries far beyond those present.  I spoke to a teacher who was born in India, raised in Malaysia, lived in the UK, and now teaches in Turkey.  She speaks 7 languages and holds 4 degrees.  I spoke to a gentleman who was born in Minnesota, and in 10 of the last 14 years has taught in Brazil, Mexico, and now Egypt.  The stories that they tell and the experiences they have had were fascinating to hear.  It made me want to travel even more!

Finally, I must bring this all together by speaking about what Model UN can do for a student.  There are the obvious like meeting new friends from around the world and discussing relevant global issues.  But there are the underlying benefits like installing authentic learning, higher order thinking, public speaking, understanding how the United Nations operates, writing resolutions, thinking about the future, and so many more.  With the US moving towards the Common Core Standards, there is a great call for authentic learning and deeper thinking, which this overwhelmingly provides.

We joke around with other advisors at conferences that doing MUN is fairly addicting.  Going to your first conference just makes you (and the kids) want to do more.  For those of you interested in joining the MUN family, I encourage you to look at the Global Classrooms website, which has tons of resources on how to get an MUN team going.  I will also put a quick plug in for the Ron Clark Academy Model United Nations Conference, which takes place on March 2, 2013.

Here are a couple of pictures from our Turkey trip: 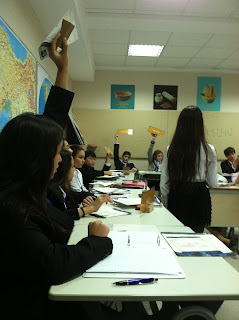 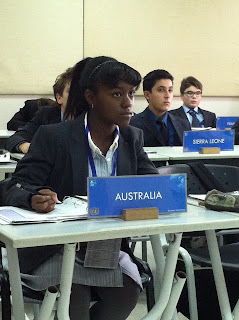 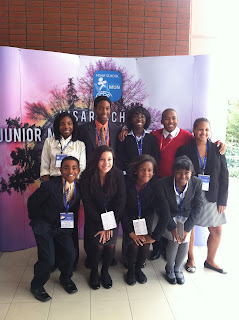 Posted by Adam Dovico at 4:18 AM No comments: