Inside the Trenches of the Principal: Week 25

It was a fun week kicking off the Houses in full force! As a school, Houses accumulating over 4,000 points just this week! That's a lot of positive recognition going on! I am hoping to find data moving forward that supports the Houses leading to a decrease in office referrals and discipline issues. On Friday at Rally, we revealed the House Wheel to the students, who also learned about how it will work. I had many questions about that this week on social media, so I'll do a brief explanation below. This game was obviously inspired from Ron Clark Academy, and thankfully having worked there for many years, I was able to recreate it with a few new twists and turns for my school! 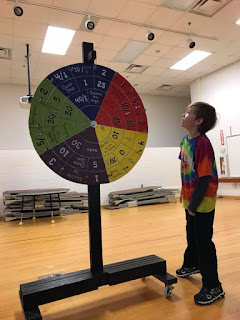 First, each adult House Leader selected a student from their House who exhibited great character, excellent behavior, and stands for what we look for in a Moore scholar. One at a time, the student would come up and spin the wheel. On the first spin, the segments on the outer rung are what are used. If the wheel stops on a space that simply has a number, the game stops and student earns that amount of extra points for their House.

If the wheel stops on a space that has a number and a down arrow, the student may elect to keep the number of points, or spin again. If they spin again, you now look at the second rung to see where it lands. Again, the same rules apply here. A number space stops the game and earns the House that number of points and a down arrow gives the option. The third rung acts the same.

If a student manages (on a rare chance) to make it all the way to the fourth level, which is the center of the wheel, there is one spin that occurs. That spin can land the House 100 points if the wheel lands on the House's color, or 25 points if it lands on another House's color (it also earns the House in which it landed 25 points).

As you go onto rung two, three, and four, there is greater risk/reward present. There are spaces that give you 0 points, but also spaces that can give you 20, 25, 30, etc. There are also fun spaces like Double or Triple Up, which doubles or triples your final score; Double the High gives that House double the points that the highest score from that day earned; and Quick Stop, which has the spinner spin and then I stop the wheel at a random moment.

Another funny thing happened on Friday. As I walked around the school, I saw a large number of my teachers wearing their House colors. I didn't make it an official House color day, but I think that may end up being one of those organic things that blossom from this program. I would love it to because I am starting to build up my purple collection!